The Buquebus Ferry from Uruguay to Buenos Aires is like a cruise ship. When the sun catches its perfectly shiny outside as it glides across the river the whole thing seems to glow.  Even its name, Francisco, in honor of the Pope, sounds regal. They require you wear white booties (like those of crime scene investigators) onboard so your philistine shoes do not damage the boat’s pristine floors. Inside it has plush chairs, deep carpeting, sweeping staircases, a well-stocked snack bar, and a duty-free shop the size of a small grocery store. The boat is so large and so weighted with people, cars, luggage, and duty-free Toblerone chocolate that you barely feel it moving.

This was not the boat we took.

No. On the day when meteorologists were predicting 60 mph winds, we took the SeaCat, which is a glorified pontoon boat where luggage is lashed to the deck and covered with tarps. I admit that watching it bounce and skip into the port caused me a low level of panic. Watching passengers around us ready their bright white, plastic barf bags for the journey did nothing to calm me. And when they slammed the doors shut and told everyone to sit tight because while the journey might not look or feel safe it definitely was, I may have turned to Nathan and told him I wanted to get off.  I didn’t get off, mostly because I couldn’t.

The televisions proudly told us that the boat traveled at a speed of 30 knots.  It did not tell us how much air space there can be between your bottom cheeks and the seat when the boat hits waves at that speed.  Several is the answer.  It also did not tell you how loudly people may shriek, in both fear and joy, when this happens. Really loudly and shrilly with the notable exception of the gentleman who just groaned as if he were dying. Our children responded in their usual ways. The boy said he wasn’t pleased, but it certainly didn’t stop him from eating or talking.  The girl spent her time singing and pointing out to our neighbors that we were on a boat! On the water!We made it to Buenos Aires and spent an evening with an Aunt and an Uncle before heading on to Santiago de Chile.

I’m not usually one to get worked up about seeing something just for the sake of seeing it, but have you seen the Andes from 30,000 feet? I felt a little like the girl, wanting to nudge people around me and say, Look! Big mountains! With snow!  Judging by the way the Chilean woman next to me (who I’m just going to wildly speculate had seen the mountain range before and possibly even from high altitudes) kept leaning over to take pictures and videos until the flight attendant told her she really, really had to shut it down for landing, I don’t think I’m exaggerating their awesome beauty. Really, my feelings didn’t change much once we were on the ground. Walking around in the city we’d look up and catch sight of the mountains–sometimes snow-capped, sometimes frosty with fog, sometimes glowing pink in the sunset, and sometimes just massive and brown–and gasp. There is something very humbling about being in a city of 5 million people, of being surrounded by crowds, traffic, skyscrapers, restaurants, and all the fine trappings of modern civilization, and having all of it dwarfed in magnitude and beauty by some ancient rock and dirt. Check yourselves humans.

In the morning! With a moon! 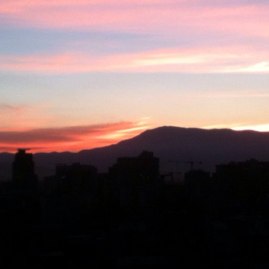 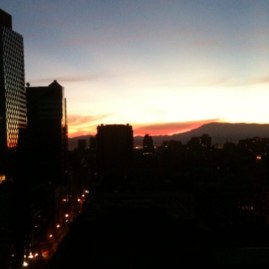 Montevideo, both in area and population, could fit into Santiago’s  hip pocket, so it’s entirely unfair to compare them.  However, I’m not going to let that stop me. Chile is very different than Uruguay.  That should be obvious, right? They are different countries with different histories, different climates, different cultures, etc. I shouldn’t even need to say it, but both Nathan and I were caught off guard. I think having only traveled between Uruguay and Argentina in the past 9 months it was easy for us to lose sight of the bigger picture.  Argentines and Uruguayans will spend any amount of time telling you about how different they are from each other.  And they are. The accents are different enough that you can distinguish them.  Argentines use a kettle for their mate while Uruguayans tend to use a thermos. Argentines eat lomitos and Urguayans eat chivitos. I’m joking a little of course, because there are real differences between the two countries, but things are also similar enough that both cities feel familiar.

Chile was a different story altogether.  In the airport I heard people talking and briefly wondered what language they were speaking.  We were so accustomed to the lilt of Uruguayan Spanish that the harder and completely distinct sounds of Chilean speech sounded entirely strange.

The Spaniards didn’t manage to kill off all the indigenous people in Chile like they did in Uruguay, so there was a much broader mix of people. In fact, there were people (and foods) from all over the world.

We ate Japanese food (without any cream cheese added!), Indian food, spicy food (oh, spicy food!), Chilean-style ice cream and so many avocados (hot dogs are even served with a thick layer of avocado). According to a PSA we saw, Chile is second only to Suriname in its sugar consumption, which may explain why when we ordered juice we were served uncarbonated orange Fanta.

The streets were cleaner in Santiago. Less trash blew around and there was so little dog poop on the sidewalks that I almost forgot to look down while I walked.

Santiago also felt somewhat less child friendly.  Of course, this is an observation based on limited time and experiences. One of those experiences did include a woman insisting that the girl give up her seat on the subway. I can’t imagine that happening in Montevideo where people practically leap out of their seats to make room for kids. To be fair, Uruguayans are particularly accommodating to and appreciative of kids. It’s rare to make it through an entire outing  in Montevideo without our kids being patted on the head, chatted with, pressed for a kiss, or offered candy by people young and old alike–and that’s even when they are being totally obnoxious. Maybe, though, it’s just a difference of living in a place versus being a tourist for a brief time.

And we were tourists Santiago. More on how we touristed in a bit.